BEST’s South African partner, EnergyRite has been working with Moral Foods, a local franchisee of Kentucky Fried Chicken (KFC), for the past few months, and in a short time has generated impressive savings for two pilot stores

Facing increasing energy costs across his estate of 16 successful stores in the KwaZulu Natal region, Mr. Rughubeer was keen to get a better understanding of the energy hotspots within his business and identify opportunities for savings.

EnergyRite performed a full site audit and set about installing BEST’s state of the art, real-time energy monitoring solution, Eniscope, within the Inanda and Phoenix stores that would act as a pilot for a wider store roll out.

The data collected through Eniscope allowed Scott and his team to perform a detailed analysis of the energy consumption within those stores, allowing for no or low-cost savings to be identified and presented to Mr. Rughubeer.

“Using data collected in real-time from BEST’s sophisticated analytical software I was amazed how quickly potential areas of savings were identified. Within the first month we were saving Mr. Rughubeer a substantial amount of money.” Says Scott Fuller.

Key to those energy reductions was a process called ‘Daily Start Up Synchronisation’ where Scott and the EnergyRite team identified patterns in the daily routines and processes at the stores. Using these patterns as a baseline they were able to identify opportunities for reduction and monitor the effects in real-time.

At an equipment level, on-site chillers were fitted with timers and thermostats, eliminating the wasteful legacy system that relied on pressure pads. LED lighting was fitted throughout each store, front and back, including signage.

Over six months Energyrite were able to generate a total of R148,190 (around £8,500) of savings across the two stores’ electric bills, cutting nearly a quarter (24%) of their total monthly electrical consumption. In simple terms, this could be equated to the cost of providing 5,951 Streetwise 2 meals to customers.

However, the energy savings don’t stop there, Scott and the team at EnergyRite have been given the green light to extend the pilot to the remaining 13 stores and are already in the process of identifying further reductions across those stores.

The success has opened up doors with other franchisees across the region, with negotiations for a further 150 stores already underway, and the potential to install across the 900 KFC franchises within South Africa in the future.

Moral Foods owner, Mr. Rughubeer says, “We are delighted with the results EnergyRite have been able to achieve, they have exceeded our expectations.” 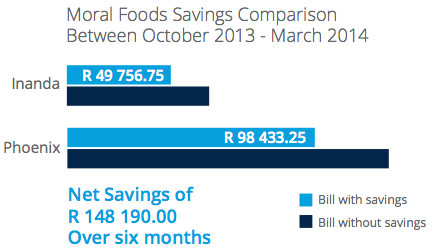